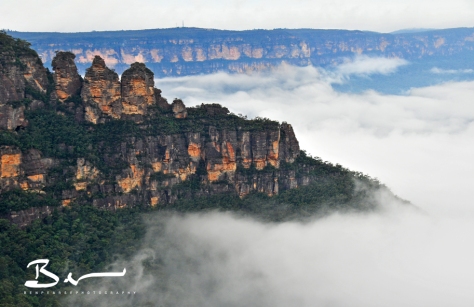 If you happen to be up in wee hours of the morning when conditions are just right, your bound to see some …..foggy goodness. Though it can be hard to predict at times, some mornings I’d swear conditions were perfect, yet nothing. And other times I’d see the valley choca bloc full of the stuff, grrrrrr. Generally speaking there needs to be  humid conditions, near 100% in order for the fog to settle in valley. Commonly known as radiation fog it is formed by the cooling of land after sunset by thermal (infrared) radiation in calm conditions with a clear sky. The cool ground produces condensation in the nearby air by heat conduction. Radiation fogs occur generally at night, and usually does not last long after sunrise, though with the right conditions it can last passed midday in the valleys. Radiation fog is common in autumn, and early winter. And the effect, well that’s just stunning to behold….

I often find myself thinking that the fog takes on the appearance of how the valley would have looked when water filled them. Some mornings you would swear there was an ocean below you, an ocean of white fog that you could walk on……So if you do find yourself up early in the morning with a bit of time to kill, go take a look as it might be one of the better sights you’ll see in a long time….

See you out there, 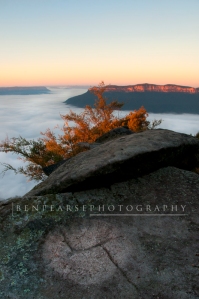 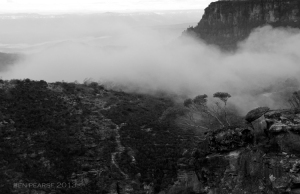 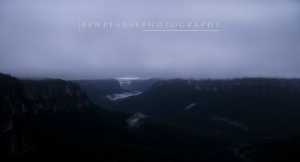 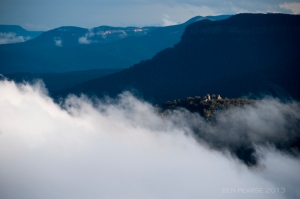 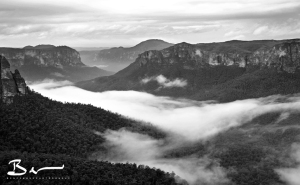 low fog in the grose valley 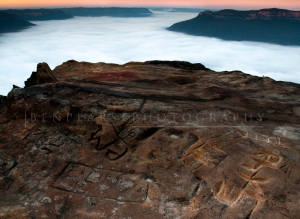 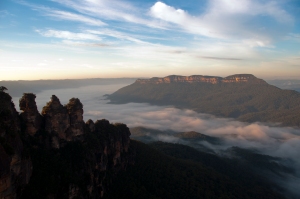 early fog in the valley 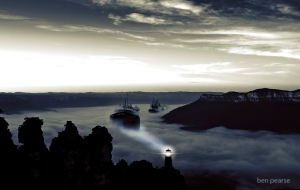 I’m still half asleep, this can’t be… 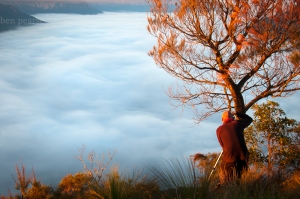 An integral part of living in the beautiful Blue Mountains in Australia is dealing with the annual threat of bushfires. In order to control this threat the local Blue Mountains district  RFS do a great job with planned hazard reduction controlled burns throughout the year. Whenever I see or smell  the smoke in the valleys I try and make a point of grabbing my gear and then head out to get some shots. There often is a great mood which settles in  with the added smoke in the valley as seen here.

In capturing the Valley mood panoramic i knew that as the light faded the smoke would turn slightly blue and combined with the low light, it would make a great shot. I waited until the light on the Three Sisters had all but faded, leaving just a small glow on Mount Solitary. At this point I pressed the shutter and I knew I had captured the scene I pre- visualised in my head. The RFS are currently doing allot of hazard reduction burns and I have already captured some more great photos, so stay tuned…..

This print can be purchased here, as well as many other photographs from this great part of the world we live in.

Have a super weekend…. 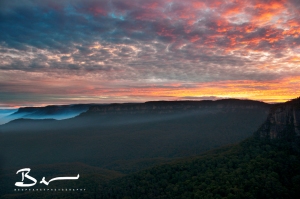 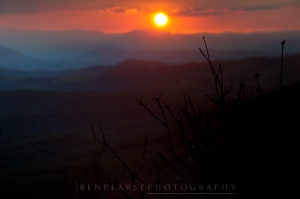 Welcome to the first posting for Ben Pearse Photography. Firstly a big thanks to all of the incredible support I have received via my facebook page. I really didn’t think my photographic journey would be embraced by so many…….A huge thankyou for that! It makes a huge difference in knowing that people are really enjoying my photography.

So whats with the blogs then, you say. I thought I would give people, the option, to get a more in depth look at Ben Pearse Photography. I’m looking forward to sharing more regular photos and some of the behind the scenes processes and information in getting the photos to the selling floor. For me photography is really about showing you what I see when i’m out in the field. It’s about how I interpret the scene i’m looking at compared to everyone else and how i want you to see it too. I can’t think of a better area to live in and whilst other photographers might journey to other sides of the globe, i’m happy to stay focused right here for now. i just love it! There’s so much to show you…..

I hope in time that people will get an insight into my photography and what drives me to want to showcase the beautiful Blue Mountains of Australia to the rest of the world. I hope you find the time to tune in when you can and see what I’ve been up to.

See you out there….