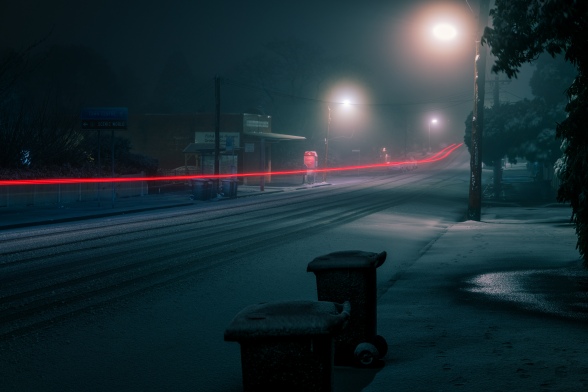 There had been a slight chance of snow a couple of times throughout July-August here in Katoomba, however it never quite eventuated. Forecasts on the 22nd of August were starting to look good for some snow falling here in the upper Blue Mountains in the late afternoon on Tuesday 23rd. I had seen some video online of some good falls happening at Shooters Hill (1355m), one of the high points in the central tablelands, and it was starting to look promising for Katoomba.

At around 6.45pm I could see the first proper flakes and within an hour it was starting to settle on the ground. As I stood on my porch watching the cars go up the road in the snow, I had the thought of getting a long exposure image as the car travelled along Lurline street. I grabbed the camera and a umbrella and setup on the footpath and waited for a lone car doing about the right speed for what I wanted. I had estimated I needed about 15-20 seconds to expose the shot correctly and get the red trail I envisioned.

After waiting for a few faster 4WD to exit the street, I saw a car approaching, quite slowly. With the shot pre-framed, I pressed the shutter as it entered my frame and then ended the exposure after 20 seconds. When I looked at the back of the camera, I knew I had the shot I envisioned and it was time to go and warm my hands by the heater….This is the fifth image in the “atmosphere” series which explores the transitional atmospheres within a landscape or urban environment.

The next morning we went out before sunrise looking to see how much snow was around. I was a little dissapointed to see that we didn’t get any more falls that night as I was hoping for a really solid dumping…We drove around and found some nice views looking across to Narrowneck plateau on sunrise, which had a nice light dusting on the trees. I waited for the early warm light to filter in and took a few frames. I’m still hoping that we’ll see another good snowfall here in the mountains, before the weather warms up later in the year.

Thanks for viewing, cheers Ben